Medigap Plan G is just one of many Medigap plans. Medigap plans used to just be referred to as Medicare Supplements and were also commonly called Secondary Plans. These plans have gone through many changes over the years, but a few things remain constant. At their core, these plans attach to Medicare Parts A and B and cover various portions of the out-of-pocket associated with these two parts of Medicare that make up what is known as Traditional or Original Medicare.

Why are there so many different Medigap Plan Letters?

The National Association of Insurance Commissioners agreed in 1990 to standardize the Medigap plans by simplifying what plans were offered. In 2010, the revised plan offers its current state of standardization. The idea was to eliminate confusion and redundancy. Prior to that Medigap plans being standardized, many states just had hodge-podge plans made up of several riders that were hard to distinguish without really reading each element of the policy. There are a few states that were not part of the National Association of Insurance Commissioners’ Standardization. These states are Wisconsin, Minnesota, and Massachusetts. However, these states have a Plan G equivalent concept that can be built by putting together the appropriate riders.

Why is the Medigap Plan G so Popular?

The Medigap Plan G has become extremely popular due to the simplicity of the coverage and the changing of Plan F availability under the Medicare Access and CHIP Reauthorization Act of 2015, also known as MACRA. Medigap Plan G covers all of the cost-sharing variables associated with Parts A and B or Medicare with the exception of the Part B deductible. These cost-sharing variables include but are not limited to the following: 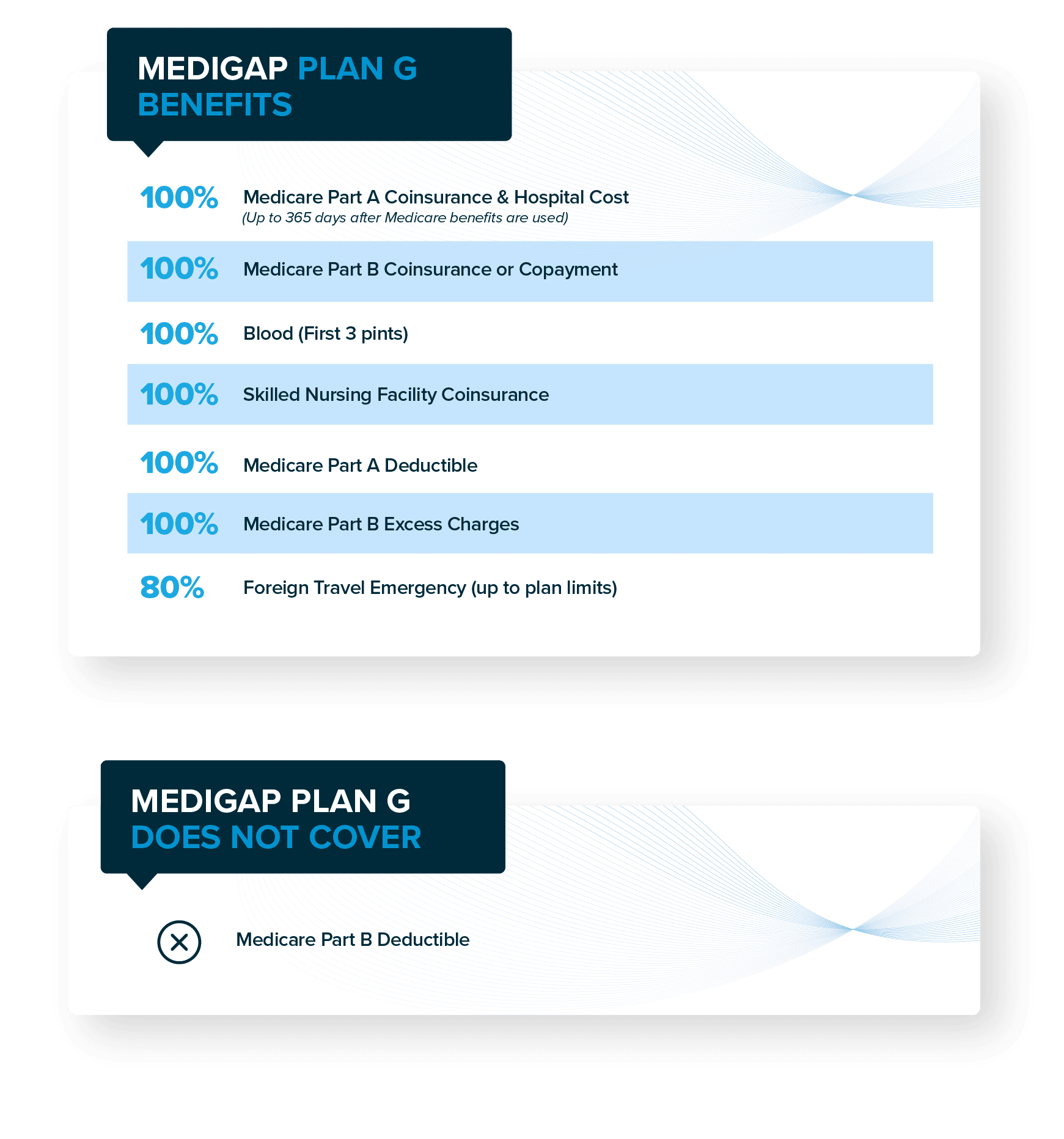 How did MACRA Affect Plan G?

MACRA changed several things for Medicare beneficiaries. One of the ones that everyone immediately felt was the new Medicare cards that went out with Medicare Beneficiary Identification Numbers to replace old cards with Social Security numbers on them. As far as Medigap Plans go MACRA began to phase out the coverage that eliminated all cost-sharing. These plans were Medigap Plan F, C, and by association High Deductible Plan F (HDF). The law made it to where only people who were eligible for Medicare prior to January 1st of 2020 could purchase a plan with no cost-sharing (Plan F, C, or HDF). Because some of the guaranteed issue rules used these plans for certain scenarios, Medigap Plan G had to absorb some of this business. Also, a High Deductible Plan G (HDG) was established to fill the void of people ineligible for HDF. Due to the broker community beginning to push the narrative that due to Plan F’s future inability to take on as much new business and the impact of years of absorbing cumbersome Guaranteed Issue Scenarios its premiums would increase. MACRA and this sentiment began to fuel the growth of Medigap Plan G.

Guaranteed Issue rules must first be separated from Medigap Open Enrollment. We will talk about that in a bit. Guaranteed Issue rules related to Medigap enrollment revolve primarily around Medicare Advantage Trial Rights and Loss of Creditable Coverage whether voluntary or involuntary (depending on the state laws in the application state). The primary concept we see affecting Medigap Plan G now is guaranteed issue scenarios for people qualifying for these events who were not eligible for Medicare before January 1st of 2020. If they were eligible for Medicare prior to then, they’d still qualify for Plan F as their primary guaranteed issue option.

Why is Guaranteed Issue Relevant for People who do not Qualify for it?

Guaranteed Issue rights are one of the primary drivers of Medigap rate increases. We are already starting to see the most stable premium Medigap plan transition to Medigap Plan N. However, Plan N has holes like Part B Excess charge coverage and doctors’ office copays that make it have a slight less predictable out of pocket. Medigap Plan G has been affected slightly by this so far, but signs point to it not being quite the plague on Plan G that it was on Medigap Plan F prior to 2020. 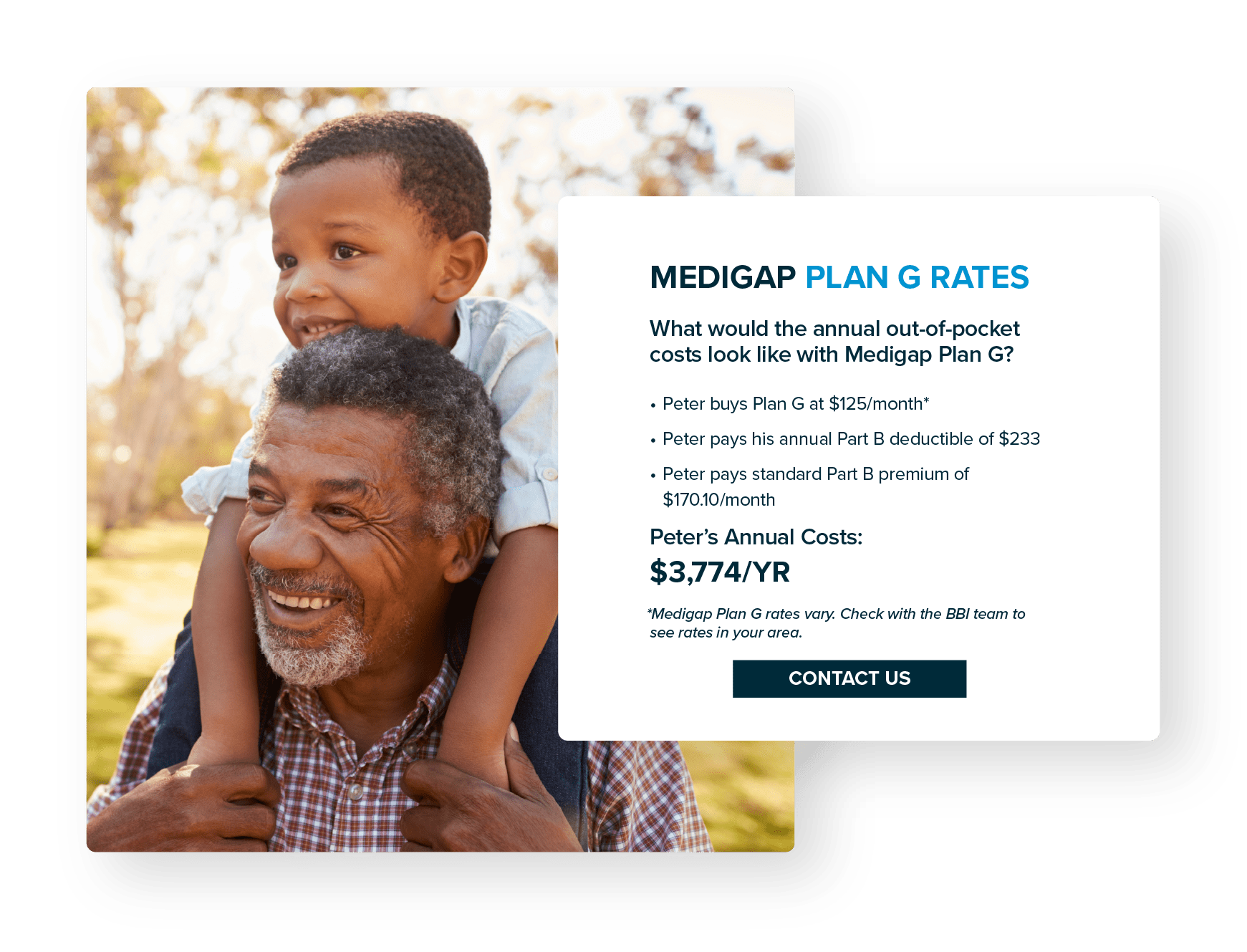 Medigap Plan G has been dubbed “G as in Greatest Value” by many brokers. This title is of course subjective or even relative to what might happen to someone, but one thing is clear, Medigap Plan G is the only Medicare Supplement for people turning 65 now that has a completely predictable out-of-pocket. Since the Part B deductible is relatively insignificant and that is the only out-of-pocket related to Medigap Plan G, it is safe to say that people who have this coverage should not be dissatisfied with their potential out of pocket. Other Medigap plans have exposure to Excess charges, though many states have outlawed these (See Medicare Overcharge Measure), and even in states that have no laws pertaining to this show very few physicians partaking in this practice. If your goal is to have the least amount of out-of-pocket exposure, look no further than Medigap Plan G.

Which Medigap Plan G is Accepted by my Doctor?

One of the many awesome benefits of Medigap plans is that any physician or hospital that takes Traditional Medicare will automatically file the Medigap Plan regardless of which company’s name is on the card. It has been our experience that Medicare Supplement or Medigap Plans are viewed very favorably by the billing staff at almost all doctors’, specialists’, and hospitals’ billing and claims departments.

As we write in an earlier section, Medigap Plan G is one of the most comprehensive Medigap plans and often the most comprehensive plan a newer Medicare beneficiary can obtain. Medicare Advantage rises in popularity due to advertising strategies, geographical expansion, and the dual-eligible Medicare and Medicaid market evolving. However, Medigap plans are still growing in overall enrollment as well. This is likely due to the volume of people aging into the Medicare market each day. Nevertheless, if you want to compare the two options you have to hit the pros and cons.

Overall, both plans have considerations, and often when a Medigap plan cannot be purchased or afforded, a Medicare Advantage plan is an alternative way to have a Maximum out of Pocket.

Why Might Someone not be able to get Medigap Plan G?

Medigap Plan G has specific one-time periods that you can enroll without having to pass medical underwriting.

These instances are most commonly the following:

If someone doesn’t qualify for one of these periods, they will have to go through a simplified underwriting process by answering some health questions, providing prescription information, and having an underwriting team determine if they’re eligible. If they are not, they may not be able to get a Medigap Plan G. This is why it is important to get this plan when you have a guarantee of eligibility.

If you have become eligible for Medicare due to disability you may have further limitations preventing you from getting a Medigap plan. Unfortunately, this is something that is hard to predict and is highly geographically oriented. If you are disabled and missed the opportunity to get a Medigap Plan G or are flat out not eligible for one, you will get another Medigap Open Enrollment Period and Initial Enrollment Period 2 when you turn 65 years old.

How do I Enroll in Medigap Plan G?

Medicare is very confusing. Even though we have laid out a lot of information here, there can be so many nuances to this process. Our job at Bobby Brock Insurance is to help you enroll in these plans and identify in the interim any issues that may come up along the way. Whether you are new to Medicare, on Medicare, and turning 65, have Medicare but your rates are too high, or just about any other scenario, we can shop Medigap Plan G quotes for you. We can get these quotes for you without ever having to talk on the phone too. Good news though, we are not some lead developer that sells your phone number to a million people. We use this information to try to serve you with one of our Veteran agents that eat, sleep, lives, and breathes all things Medicare. If you have more questions about Medigap Plan G or any other topic on this site, please consider requesting quotes or information from us. You can also use the Chatbox in the bottom right-hand corner to chat with a representative now.

Enter your zip code to pull plan options available in your area.

Select which Medicare plans you would like to compare in your area.

Compare rates side by side plans & carriers available in your area.

The CEO and President of Bobby Brock Insurance. A nationally syndicated Medicare advisor, best-selling author of Medicare Breakdown: The Alphabet Soup of Medicare, and pacesetter for over 20,000 senior market insurance agents. Featured in many insurance-related publications for his Medicare and Health insurance... Read More »
Facebook Linkedin Instagram Twitter Youtube Tiktok

Menu
It’s quick and no obligation!
Find the most affordable Medicare plans in your area
Get Our New Rates